A hand-drawn map of the city of Vindemon. (Map © Chris Harrison - used with permission.) 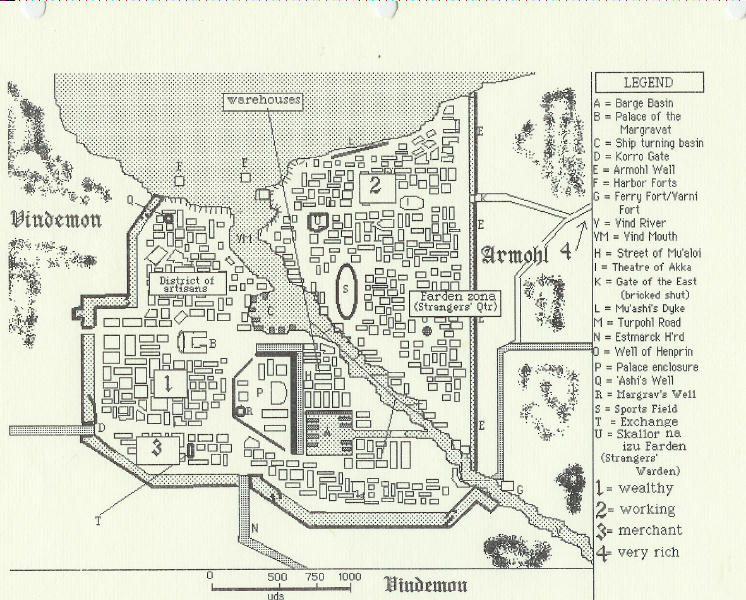 This is a proprietary image that is not available for re-use.

Your maps are extremely detailed and I would like to know if you plan them out or just start with a concept or idea. And what advice would you have for someone who had a concept, but no real plan or place to begin?

Whew! Tough question. Actually I didn't draw this map, it was done by someone else and was hand drawn. For me, I sit down with an idea, work that up into a basic concept and then build up detail over time. I tend to work in areas of the map, working more and more detail in. As an example, when I create a dungeon map, I start with a basic concept, build up the layout for each area then after I've decided on room/wall placement introduce final elements such as furniture, doors, floor coverings, etc. (Actually I haven't done any dungeon maps in a while - time to breaking out my drawing skills again methinks!) As ever my advice would be to start small and grow. For example, if you are doing a dungeon start with the first four encounters and stretch them over eight or ten rooms. Put some detail in to the rooms, even the ones that are empty, to give the players something to do. Never forget that maps are a means to an end (the adventure) not the end in and of themselves.

This may sound silly, but I'm using your maps to refer to as I consider how to map a fantasy kingdom or two I'm working on for a novel. It's a good idea of what I may want to consider while building, such as all the districts to the city. Thank you for compiling these.